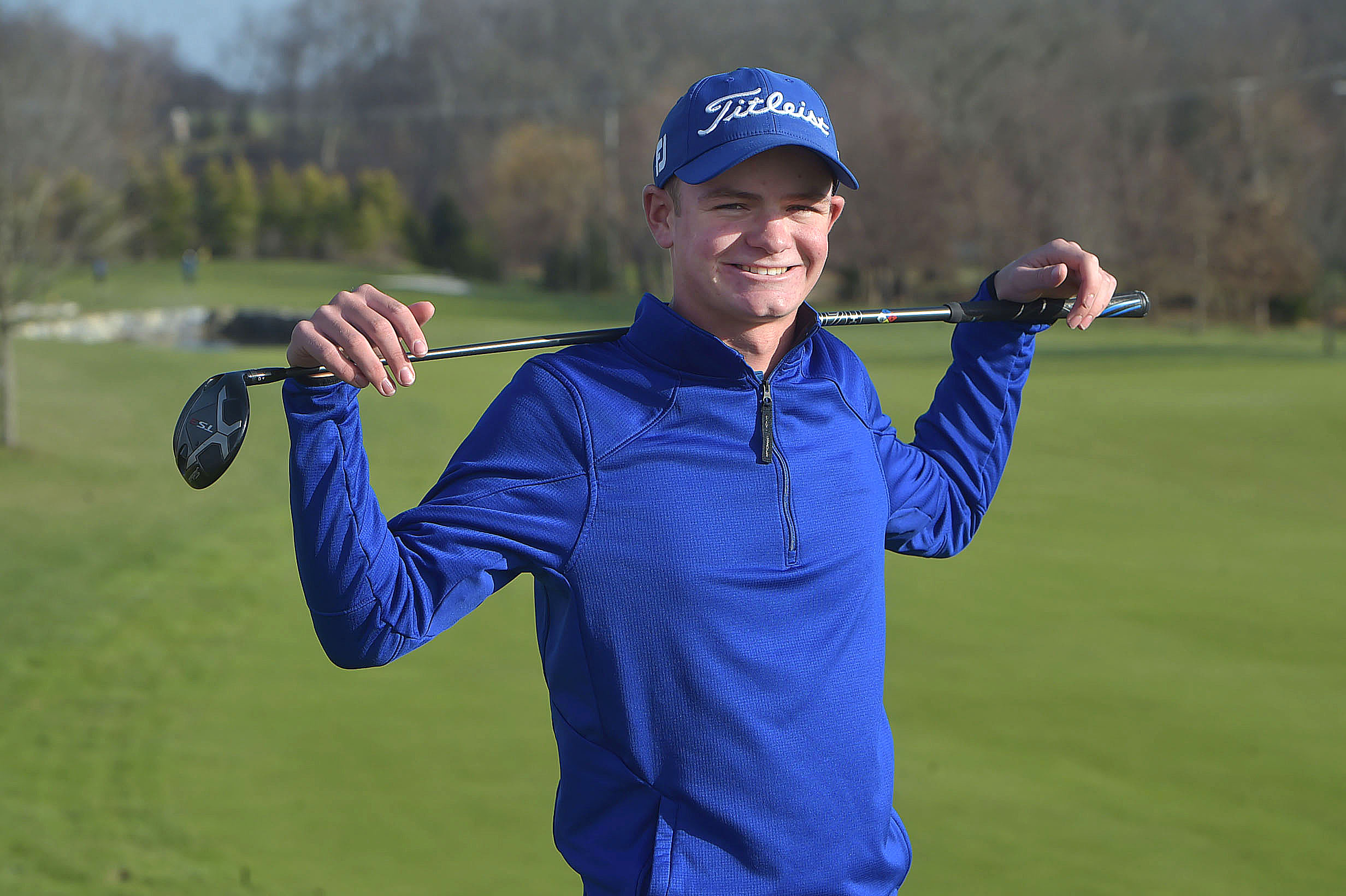 WEST BRADFORD >> The superlatives come in waves, and the plaudits are already piling up like cordwood ahead of an Alaskan winter.

Nick Gross just wrapped up one of the best freshman golf seasons in Pennsylvania High School history. At the tender age of 14, the Downingtown West freshman took high school golf by storm this fall. It hardly surprised anyone, but it was impressive nonetheless.

“I honestly believe he has a great chance at playing on (the PGA) Tour someday,” said his coach Rob Coyne.

The 2020 Daily Local News Player of the Year, Gross is currently the number one ranked boys’ golfer in the nation for the class of 2024. And he’s been among the top five in the world for his age group in each of the last six years.

“Seeing his demeanor, Nick is mentally like someone playing Division I college golf,” Coyne said. “He could easily play in college right now.”

It’s interesting to note that 13 years ago, after finishing fourth in the PIAA Tournament, Coyne was named the DLN Player of the Year. It was the highest finish ever for a Whippet … until Gross placed third this fall. It was the best finish at states for a ninth grader since 2020.

“My confidence was high heading into the season,” said Gross, who lives in West Bradford. “I was playing well and it was just that perfect timing.

“I never had that real disappointing hole. I play a solid game – nothing too flashy. I try not to make too many mistakes. I make enough birdies so that when I keep the bogeys off the card, I am usually shooting some good numbers.”

In the month leading up to the high school season, Gross notched a pair of wins and two runner-up finishes in American Junior Golf Association tournaments against many of the best players in the country. In his first high school dual meet at Downingtown Country Club, he fired a 33. His worst round through the entire season was still even-par.

“I don’t think I will ever see something like that again in my lifetime,” Coyne said. “I tried to cherish every round.”

He was 13-under-par for the season, fired a 4-under 68 at Applecross Country Club to win the Ches-Mont title, and followed it up with a two-shot win at the District 1 Championship the next week at Turtle Creek Golf Club.

“The win at Turtle Creek was big,” Gross said. “It was probably the best I played throughout the season.”

On Oct. 20th at Heritage Hills Golf Resort in York, Gross shot a 2-under 69 to finish two strokes off the lead at states. During the round, he carded the first (and only) double-bogey of the season, and followed it up with a birdie on the next hole, which was the toughest on the course.

“It was unfortunate the event was not its normal two-round tournament (due to COVID-19) as I think he would have had a great chance at coming back from the two-shot deficit,” Coyne pointed out.

“I didn’t really have expectations, but in the back of my mind I was confidence in my abilities,” Gross said.

“Wherever I went, people knew who I was. There wasn’t any hiding from the expectations. But I crave that. I want to be able to perform when there is pressure, and I think I did that.”

A prodigy from the start, Gross played his first round at age three. His parents, Shawn and Jennifer, told him the story as he was too young to remember. His first tournament action was at six and a year later he was already beating his father.

“My parents tell me stories that when I was a toddler I would get excited when golf came on TV. I was just drawn to it from the start,” Gross said.

“I played some basketball and soccer growing up, but golf is the standout. It’s been number one to me for as long as I can remember.”

“It was fundraiser and I was hitting drives on the seventh hole for donations. We’ve had a connection ever since,” Gross recalled.

“He was seven years old, so I knew there was tons of potential there, but you don’t realize how good he is until you see him play in person,” Coyne added.

“While we were hanging out on the practice green, he was telling me how a putt was going to break a certain way because the grass was growing that way. I was just out of college and he was in grade school. I will never forget that. At that point, I knew this kid was special – he is going to go places.”

Two years ago, Gross started a training regimen. Nowadays, he is carted around to tournaments by his parents, but he is highly self-motivated and normally works on his game alone, with input from Malvern-based PGA Professional John Dunigan.

“I practice alone,” Gross acknowledged. “I go to my swing coach (Dunigan), and get a lot of feedback from him. My Mom checks in on me with the fitness stuff and before a tournament my dad and I will look at the course to get ready.”

Fourteen is a bit early to be thinking about long-term aspirations, but Gross isn’t your average teenager. When asked about pursuing college golf and eventually turning professional, Gross said: “That is the goal.”